Those you that know me well know that I don’t like playing in snow very much. Even as a child I hated getting cold, and playing in snow means getting cold. However we have gotten two free sleds through Titus’ job and when a friend called and said she was taking her kids sledding I knew I had to go. “Alright, we will meet you there!” I told her. “But I really don’t know how long we will be there. Probably only 10 min. Faith will get cold pretty fast.” Boy was I wrong. When we got to the park I put Faith on a sled to watch everyone. I figured the longer she sat there the less snow would get on her and the less snow = less coldness. And yes, that is Faith not some random boy baby. I don’t really want to talk about her boyish snow gear.

The green sled is much bigger and heavier so I thought it would be the better one of the two.

The snow was pretty fluffy and was much better for making snow forts and snowman. But I walked up and down the hill to pack down the snow and then the kids could go down really fast.

And then all of sudden Faith figured out what was going on. That girl loves sledding!

Apparently the green sled is slow and the fast one is the blue one. The green sled just creeped along and was perfect for Faith. I actually put her on and shoved her down the hill by herself. 🙂 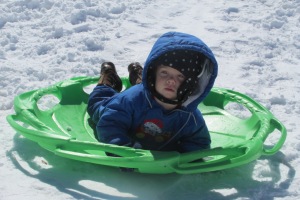 James and his friend Addy

James just loved sledding! He would zip down the hill on the fast blue sled barely sitting down before moving! Here he is on his tummy:

Faith wanted to go on the fast one so James held onto her and they went down together. James is such a good big brother!

Have you noticed the lack of pictures of Gideon? That’s because he got cold very early on and played in the truck the rest of the time.

So much for Faith being cold and saying we would only sled for 10 min! We were there for about an hour, and James and Faith made it the whole time! Apparently Gideon has Mommy’s genes. 😉 This is my favorite picture. The cold finally caught up with James, but Gideon who has been playing in the truck with the sun beating down on the windows is happy as pie! 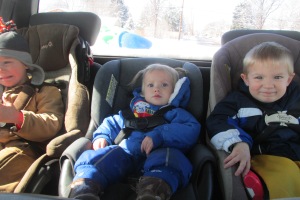 When we got home the kids all drank hot chocolate together! What a great morning! I am so so so glad that Lisa unknowingly forced us to go sledding!

The first snow is always exciting. I remember waking up as a kid every morning hoping for the first snow.  And now with my own kids it’s fun all over again.  Now personally I don’t want snow in October, especially since fall just started and I’d like to enjoy it, but we woke up to about an inch on the ground this morning.  It wasn’t in the forecast I read so it was a complete surprise.  I don’t think James remembers snow from last year because he thought it was pretty cool.  Last year he pronounced snow with an S at the end, snows, but it sounded more like nowse.  It was soooo cute and I’m going to miss him saying it that way. James had to go outside right away so he and I got our boots on.  I couldn’t get him to wear a jacket and he looked terribly cold to me. 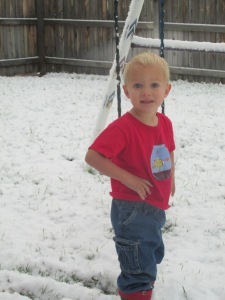 When he first saw the snow from the window he asked right away where all the dirt was. ha ha, I told him it was under the snow.  So he had to go check out his dirt pile:

Then I showed him he could eat it.  He thought that was pretty cool and tried snow at different points all over the back yard. So cute!

By that time Gideon woke up.  We’ve had two really really hard nights with Gideon (lots of crying for hours during the night).  He woke up with a horrible cold this morning.  I’m starting to wonder if maybe he has an ear infection (or maybe two ear infections) and that’s why.  It’s terribly unfair to be sick on the first day of snow.

An hour to two later Titus got up and said, “It snowed! We have to go play in it!” He was a bit behind, but we got everyone ready again (James still refusing to wear a jacket. What are we going to do this winter?? ha ha) The snow had already started to melt by then.

Titus and the boys made the cutest little snowman!

All the snow melted by the end of the day, except maybe stuff in really shady spots and the bottom part of the snowman.  Maybe we will still get a fall after all.  About three or four weeks ago someone told Titus when you can see snow on the foothills/mountains Denver gets snow 2 weeks later.  And she was pretty close!