After Thanksgiving is done and we are heading into Christmas there is always a debate about what to do with the pumpkins. We had nice pumpkins all the way from Minnesota from Grandma’s garden, we had one from the pumpkin patch in Riverton, and we had one from the library. A squirrel had been scratching at one so I decided to chop up the pumpkins and feed the wildlife instead of just throwing them away. I thought this would be great fun for the kids too. So armed with hammers and an ax we went outside to chop the pumpkins. 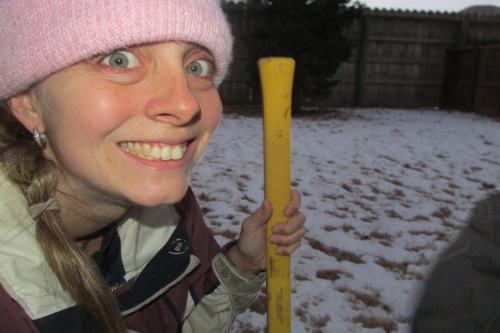 James got into it right away.

Faith decided to drive from the back yard to the front yard. She just watched the pumpkin pounding, her dolly safely tucked inside her coat.

Gideon on the other hand did not have fun. He never did pound any pumpkins either. 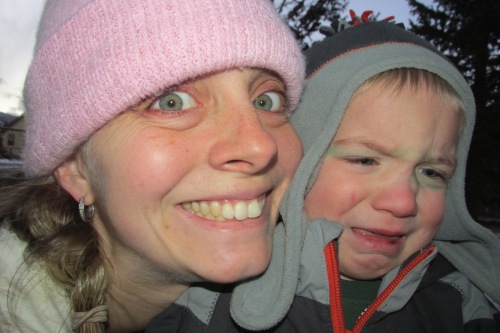 We didn’t have to wait long at all for the squirrel to figure out that we made his job a little bit easier. The very next morning we got to watch him run pieces of pumpkin up the tree. 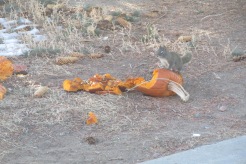 It has been several weeks since we chopped up the pumpkins. We have watched countless times the squirrel working on hiding his pumpkin bits. James even found some pumpkin pieces way up in the tree branches where the squirrel hide them. We also haven’t had any bunnies lately because the squirrel chases them out of the yard. He doesn’t want to share. All that was left was a big pumpkin that really didn’t get chopped very well. I have been planning on throwing it away and writing this blog post with just the squirrel. But then a few days ago our snow was covered in deer tracks and a big bite was taken out of the pumpkin. Every morning less of the pumpkin was left. I was sad the deer was eating the pumpkin during the night when we couldn’t see it. And then today this happened!

I might have been just as excited as the children!

This buck ate every bit of the pumpkin pieces in the yard and even licked our bird feeder for a bit before walking calmly out the front gate and down the street. Broad daylight, and we live in the middle of town. Crazy!! I am so glad we didn’t throw the pumpkins away!