I honestly was not planning on writing a whole blog post about my children’s Christmas clothes. I just wanted to take a picture of them to put on facebook so the grandmas back in MN could see them. But the pictures turned out so funny I had to write about them

We got back from church a few Sundays back and I told the kids we would take pictures of their clothes to show Grandma.

We started out sitting down and everyone had a book to look at. But you couldn’t really see their clothes very well.

So I told them to stand up. But Faith’s book was too big and she kept dropping it and not standing up. 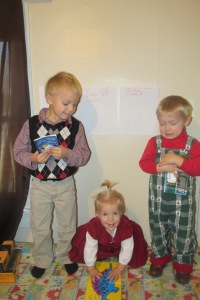 So I gave Faith a different book to hold that wasn’t so heavy. But that made Gideon mad. Check out his face in the corner: 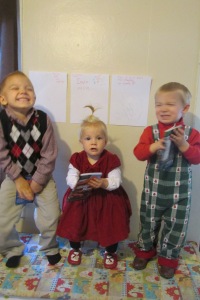 I told the kids to say cheese and look at the face Faith gave me!! And Gideon is still mad.

I went to Kmart and lusted after all the cute Christmas dresses. But I just couldn’t get myself to spend $20 on a dress just for Christmas. So I went to the ARC thrift store and found a Baby Gap red dress for Faith. It is just beautiful on her! It has cute ruffles down the front and netting underneath. It’s the prettiest dress she has ever had. I paid less than $5 for it.

James shirt and vest also came from the ARC. 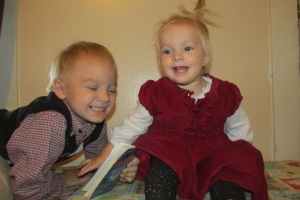 Gideon’s overalls I made for my little brother when he was a toddler, who is turning 13 soon so they are about 10 years old. I would have been in high school when I made them. They are still in great shape.  They are on the fourth little boy wearing them, Levi, Lincoln, James and now Gideon. (and Gideon is still mad) 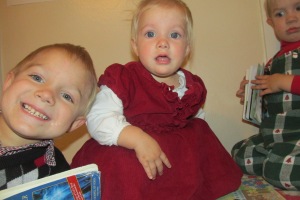 This entry was posted in Uncategorized and tagged christmas, Faith, Gideon, James. Bookmark the permalink.

One response to “Christmas Clothes!”