When we first moved back from Hawaii my MIL gave me some homemade vanilla, which was amazing.  I finally made pancakes with them that my hubby actually liked with it.  When I ran out I tried all sorts of things to get that taste: imitation vanilla, putting in an insane amount of the imitation stuff, and buying store brand real vanilla.  But nothing worked, I couldn’t get that pure vanilla taste that my husband liked so much in his pancakes.  So I decided to make my own.  It’s actually very easy to do, and healthier (the imitation vanilla is full of bad stuff surprise surprise!), and one blog I read even tried to claim it’s cheaper.  I’m not sure I’m believing that last one since imitation vanilla is soooo cheap, but since I didn’t keep track of my expenses this time around I still don’t know for sure.

All you need are vanilla beans, an empty bottle and vodka. I had never been in a  liquor store before and I made sure the guy helping me knew I was making vanilla out of all this vodka I was buying, not drinking it! Not that he cared one bit, it just made me feel better telling him that. 😉 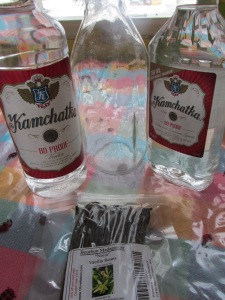 Slice each vanilla bean almost to the top so it is split open: 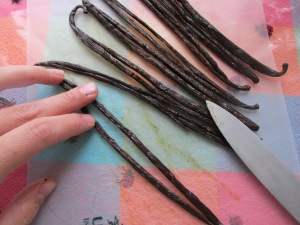 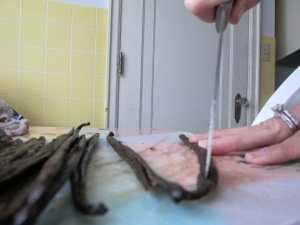 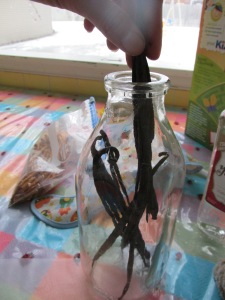 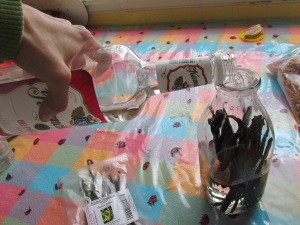 Now you just let it sit for a long time in a cool dark place until it’s ready. You should shake it about once a week to stir up the beans.  I got a lot of different times on how long to let it sit, anywhere from 8 weeks to 6 months!  Mine sat about 5 1/2 months.

When you think it’s done you need to strain it.  A lot of places I read said to strain it into a coffee filter so you don’t get all the seeds, but I didn’t have one and most of my seeds stayed at the bottom of the bottle anyway.

Then I poured the strained vanilla into a new bottle, I didn’t have a funnel so I

made one out of the vodka bottle. 😉 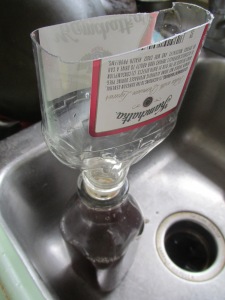 And that’s all it takes ladies (and I guess any gentlemen that read this blog?) 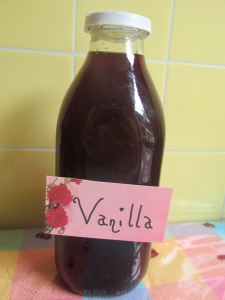 I put all the beans and the vodka I had left over from the first batch into the same bottle with all the seeds to sit another 6 months. I guess you can use the beans twice, so maybe it is cheaper than the imitation stuff?

And finally a picture of the pancakes I made that morning with the ‘real vanilla’.  I’d have to say, I’m kind of disappointed as they did not taste the same way as the first ones 2 1/2 years ago did.  There are several kinds of vanilla beans, so maybe I didn’t get the same kind.  Or maybe I didn’t let it sit long enough and isn’t very strong vanilla. I also wasn’t very good at remembering to shake the bottle, so maybe that was it? The very interesting thing is that the pancakes turned out very fluffy, which they hadn’t been all these years I’ve made them with the imitation vanilla.  Does vodka make pancakes fluffy? 🙂 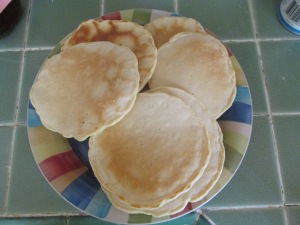 This entry was posted in Uncategorized and tagged hubby, vanilla. Bookmark the permalink.